Eva O’Leary grew up in small-town Pennsylvania with little more than a couple of streets, one big intersection and a huge football stadium. The stadium really is huge. It is the third largest in the world, with a 100,000-plus capacity for fans attending home games. Her hometown is called Happy Valley, also known as State College, though the first name might not always be so apt. State College comes from the campus of Pennsylvania State University, the largest complex in town apart from the stadium. The football team, in turn, is known as Penn State, short for Penn State Nittany Lions Football. (Mount Nittany is a local landmark.)

In her small town, Eva 0’Leary learned at an early age that not everything is as it seems; that there is not just one kind of reality but several, not just one viewpoint but many fragmented ones. Or at least two: there is the kind of reality portrayed by advertising in which everything is secure and good and perfect and life-enhancing, and there is the reality that sets in after the thrill of the game, when the same old everyday life catches up again, when the colours of the cheerleaders dim and the billboards start to wrinkle. That’s when the sadness seeps from the ground and from the houses and embeds itself in the minds of the people.

With an Irish mother Irish and an American father, O’Leary travelled often between the two countries with two passports, two identities, two backgrounds in her baggage. With her mother’s simple mantra — "If you can’t make it, you can’t have it" — ringing in her ears and the failed gamble of Ireland’s Celtic Tiger –  the rapid economic boom of the 1990s that took Ireland to the heights only to come crashing down again – in the background, here, too, were two realities, two standards, two truths: the old, stable existence anchored in a traditional work ethic versus the new, ever-accelerating whirlwind of global capitalism.

This exploration of dual, treble and quadruple realities, of promises both sincere and empty, and of ideals both lofty and shallow is evident throughout O’Leary’s photographic work – even as a student at California College of the Arts, where she graduated (BFA) with distinction, and during her studies at Yale University, where she earned her MFA in the spring of 2016. For the Bank Vontobel commission she has created three substantial pieces of work, juxtaposing and overlapping them in the exhibition and in the catalogue to form her project Concealer, which visually addresses security versus insecurity, one reality versus another reality, the personal, the private and the public image, and the contrast between imposed and self-fashioned identity.

Concealer is the term used by the cosmetics industry for a cream that covers and hides lines and blemishes in the skin, dark circles under the eyes or birthmarks. If concealer is not adequate, then a more heavily pigmented cream known as camouflage is used. The choice of title indicates just how intensively O’Leary has studied the physical and mental duality of the self and the individual persona. As she writes:*

"No matter how much I object politically or artistically to the rhetoric of commercial photography, I am seduced by its tricks—the ways it sweetens the body and the landscape, masks the unpleasant, and transforms beauty and desire into myth. From a young age, this kind of imagery taught me to suppress my desires, values, personality, and flaws. It's an experience common to many women; we are shaped by ideologies of domination and control within contemporary commerce; projecting fantasies onto our bodies that are not our own. I see my work as an alternate propaganda, one in which I take on the language of commercial photography in order to arrive at something darker. Self-tanner becomes a creeping rash, tattoos are strange and inscrutable, and a body of water engulfs a human body through the glittery trick of a lens."

To achieve her artistic goal in this project she engages with the selfie – that form of constant public self-portrayal in which we restyle ourselves and shape an image that exaggerates and highlights our appearance, often in a boastful way. She enlarges selfie videos found online into imposing, unframed, almost abstract-looking fields of colour, assembling them into an optical flurry of flashlights that painfully eradicates the subject and the perceptive powers of the viewer – the kind of blinding glare that stroboscopes create in clubs and discos. This aspect of the work suggests a heightening of self-portrayal to the point of self-erasure and self-elimination. 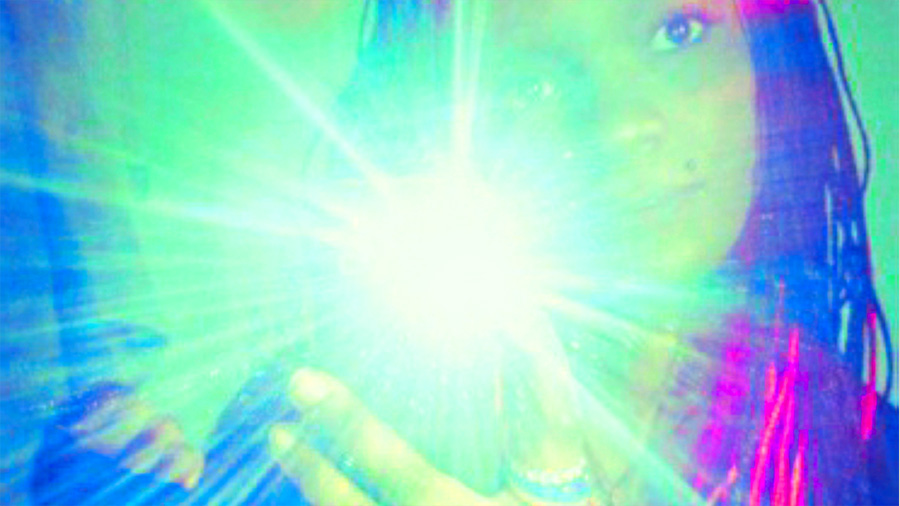 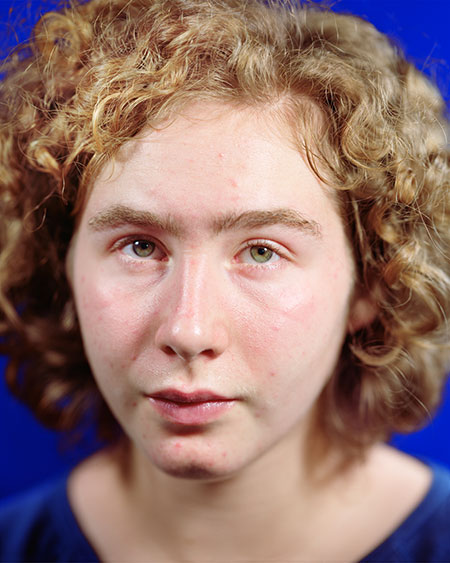 For the second part she gave some people the opportunity of "curating" themselves by staging their own appearance in the studio. In the exhibition, we see nine mirror portraits – images of young women preening in front of a mirror and presenting themselves as they would like to see themselves, and as they would like to be seen. We, the viewers, are thus caught in the mirror, as it were, observing how a self-controlled self-portrait is gradually produced and made public. Unlike the flash selfies, these portraits, with their brilliant deep-blue backgrounds, are like photographic reincarnations of Old Master paintings. And indeed, in an earlier era, portraiture was often more about the representation of status and social standing than about a precisely faithful rendering of individual facial characteristics. As O’Leary writes:

"My own experiences are at the center of my practice, and I source many of my images through vernacular photography of women's daily lives and rituals, which are collected in Instagram hashtags, Facebook albums, and homemade beauty tutorials. (…) Everywhere around me I see surfaces—skin, billboards, cake icing, photographic prints—that project fantasies. My work aims to address the psychological space in which men and, in particular, women must balance the ever-present reality of imagery that is insistently, but seductively, unreal."

The third and most extensive part of her project combines landscape photography with portrait photography and, in doing so, engages with the complex structures of our existence: how the different promises and demands and controls that affect us merge and sometimes conflict. Here, O’Leary is looking at the world in a dual role as documentarist and choreographer, photographing, for instance, a baby lying on a mirror crying, two boys – one tall and chubby, the other small and skinny – leaning against one another back to back, a plastic cup that has been slit in places and rendered useless, a face with make-up on only one side, a foot in high heels still bearing the imprints of other shoes, a male with exaggerated muscularity and a tan, faces that are duplicated, or hidden behind a fine curtain of red hair, gazing sceptically at the intruding photographer. Security versus vulnerability, fragility versus power, ice-cold versus electrically charged, self-determined versus externally driven, image versus reality, and so on:  O’Leary fans out a spectrum of opposing pairs that evoke double, treble and even multiple meanings. Again, according to the artist: 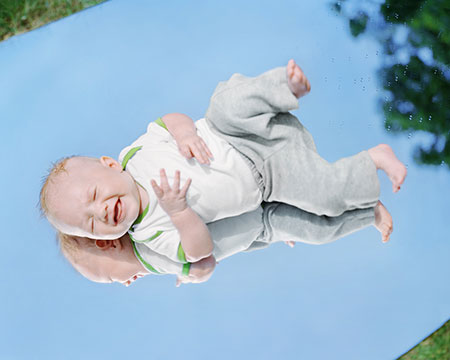 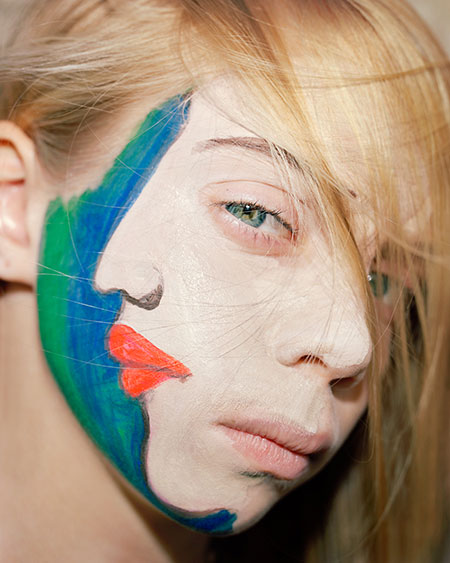 "We are living in an alienating and impersonal world, where technology offers unlimited connection yet leaves us more isolated than ever. In recent years, the western world has valued linear thinking and concrete logic over all else. Capitalism has encouraged this; we see ourselves in relation to what we are sold. The brands we align ourselves with, and the products we choose to buy are the new markers of our lives. To survive, it has become necessary to craft two identities; one public, with all of the slickness of advertising, the other private, with all the mess of feeling. We keep the world at a distance, carefully curating our public identity." 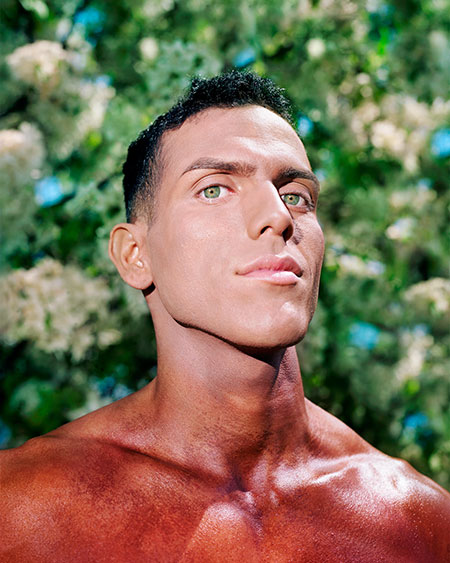 Therein lies the lure of technology and marketing: the promise that what we buy will bring us security. We buy products for the health of our families, clothes for social prestige, medication for mood control, all with the aim of remaining functional and feeling secure. But, of course, we know that some of this is purely illusory. We keep on feeling insecure. Depression and anxiety are on the rise. To survive, we forge two identities: a public persona that is smart, stylish and successful, and a private one in which we muddle through a turbulent emotional existence somewhere on the boundary between security and insecurity.

In the midst of disintegrating communities, increased mobilisation and globalisation; with the rejection of substance in favour of appearance, content in favour of symbolism, spirit in favour of the right brand, and amid remarkable attempts to establish new imperial world orders, we are faced with a storm of conflicting identities, both individual and social, which consumer goods and purchasable personae can brighten only briefly.

Not everyone sees and lives the present as one big party, and not everyone subjects their existence to sheer cynicism. The flourishing of fundamentalist ideologies in many societies is an alarming sign in all this. Having been liberated from traditional systems into an open world, we have embraced some aspects joyfully as newfound freedoms, while experiencing others anxiously as a feeling of loss, coercion, and a descent into chaos. There are few new markers in sight by which to orient ourselves, nor any reasonably reliable platforms. This project by Eva O’Leary stood out from the other submissions and won over the jury of the Bank Vontobel art committee. We are delighted to present the outstanding and cohesive project by this young American artist both in the exhibition at Vontobel and in this catalogue.

*All quotations, Eva O’Leary in correspondence with Urs Stahel.

Urs Stahel acts as an advisor to the Vontobel Art Commission.

As co-founder of the Fotomuseum Winterthur, Urs Stahel created one of the world’s most important venues for photography, heading the museum for 20 years. Since 2013, he has been a curator, lecturer and editor of numerous books on photographers. 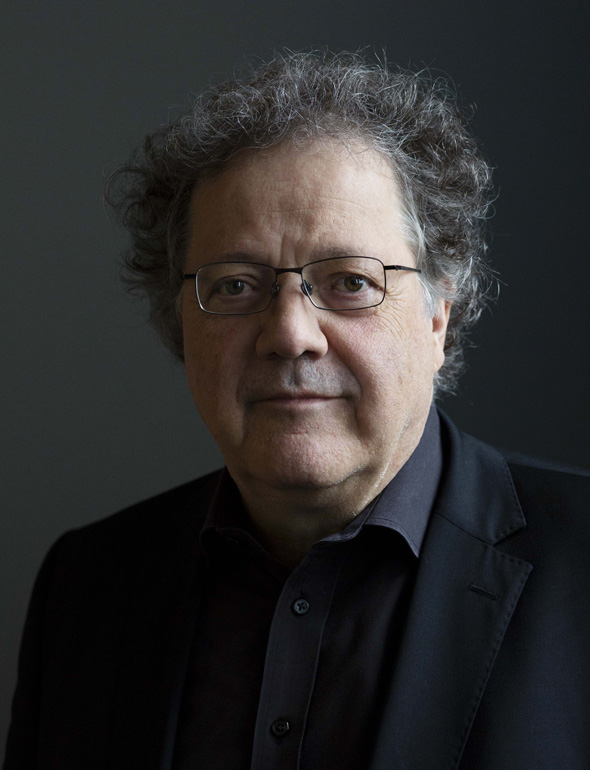